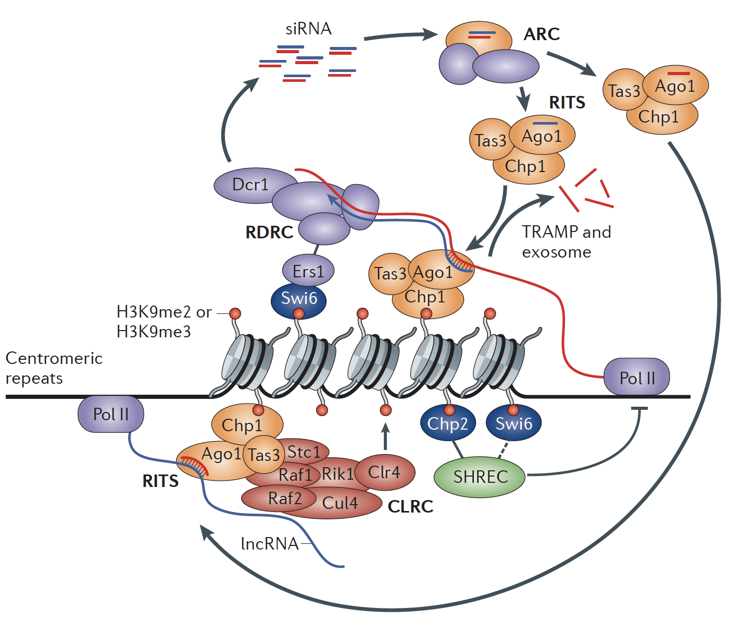 mediates the transfer of siRNAs from RDRC/Dicer to RITS. HP1 proteins (Swi6 and Chp2) are then recruited by H3K9me and promote transcriptional gene silencing. From Holoch and Moazed (2015).Nature Review Genetics.

Figure 2. A role for RNAi in de novoestablishment of H3K9me at pericentromeric DNA repeats. (A) ChIP-seq experiments showing the persistence of residual H3K9me2 at peri-centromeric DNA repeats in RNAi mutant cells (ago1D and dcr1D). (B-D) RNAi is required for de novo establishment of H3K9me, suggesting that the residual H3K9me is maintained epigenetically. (E) The chromo domain of the Clr4 methyltransferase (SUV39H1/2 homolog) is required for epigenetic maintenance of H3K9me in RNAi mutant cells. (F) Increased dosage of wildtype Clr4, but not Clr4 with a mutation in its chromo domain that abolishes interaction with H3K9me, results in more efficient epigenetic maintenance of H3K9me. From Ragunathan et al., 2015, Science. 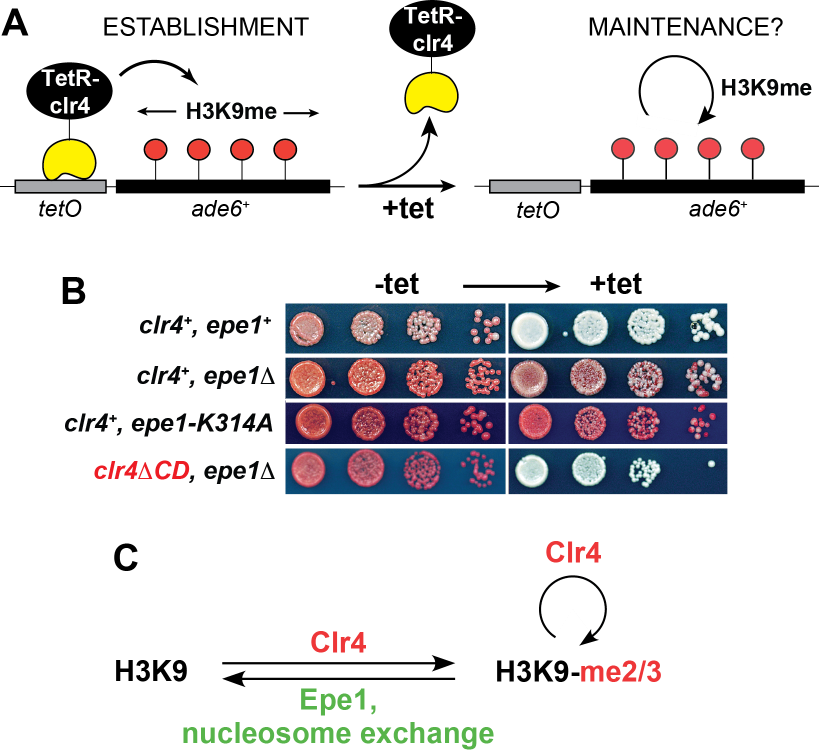 Figure 3. Sequence-independent epigenetic inheritance of H3K9me and silencing. (A) To test whether histone H3k9 methylation and gene silencing could be inherited in the absence of sequence-specific recruitment, we developed a system for inducible heterochromatin establishment at an ectopic locus. Recruitment of TetR-Clr4 to DNA promotes H3K9me and silencing, which can be reveres by tetracycline (tet)-dependent release of TetR-Clr4. (B) Recruitment of TetR-Clr4 results in silencing of ade6+ and growth of red colonies, -tet, left. Following release of TetR-Clr4 by the addition of tetracycline, +tet, right, silencing is only maintained in cells that lack the putative H3K9 demethylase, Epe1 (epe1D). Clr4 lacking its chromo domain (clr4DCD) cannot maintain epigenetic silencing, indicating that the recognition of pre-existing H3K9me by Clr4 itself is critical for epigenetic inheritance. (C) Model for establishment and epigenetic maintenance of H3K9me. Adapted from Ragunathan et al., 2015, Science.

Copyright © The President and Fellows of Harvard College